The guanidyl compound has high thermal and chemical stability, high catalytic activity, strong physiological activity, has been widely used. In the ionic liquid, the guanidyl group can enhance the stability, heat resistance and regulatibleity of ionic liquids as cations. For the guanidine-based ionic liquids, the special properties are manifested in the melting point, viscosity, density, solubility, stability, etc. For melting points, the hydrogen-censoon is conjugated in the salt cation, and the positive charge is distributed over three nitrogen and center carbon atoms such that the neutralized hydrazine salt has a lower melting point. For density, the density of the entire glyzed salt ion liquid is between 0.90-1.49 g / cm3. Regarding viscosity, due to the larger ion volume of the guanidine salt cation, the van der Waals force between molecules is enhanced, which increases the viscosity. Regarding the solubility, the increase of the guanidine salt cationic side chain will increase its solubility in non-polar solvents. For stability, the distribution of the positive charge of the guanidine salt cation makes it have good thermal and chemical stability. From the above aspects, the guanidine salt ionic liquid has excellent properties in all aspects, making it widely used in organic synthesis, electrochemistry and fuel gas treatment. 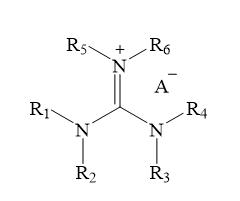