Ionic liquids are mostly composed of alkylpyridine or bis-alkylimidazole quaternary ammonium salt cations, chloroaluminate, fluoroborate, hexafluorophosphate and other large anions. It has the advantages of good solubility for certain inorganic and organic substances, wide liquid temperature and electrochemical window range, high thermal stability, and easy preparation. Ionic liquids not only have many excellent physical and chemical properties, but also their properties can be adjusted by changing the structure of anions, cations and substituents, which can be adapted to different application requirements. Morpholinium-based ionic liquids are generally synthesized by the reaction of N-methylmorpholine, N-ethylmorpholine and different substituent groups. Utilizing the designability of the ionic liquid, a functionalized morpholinium-based ionic liquid that satisfies a variety of physical and chemical properties such as liquid range, polarity, acidity, chirality, coordination ability, solubility, etc. can be obtained. Morpholine ionic liquid, as a green medium with ideal characteristics, can be widely used in many fields such as catalysis, chemical separation and extraction, functional materials and interface chemistry. 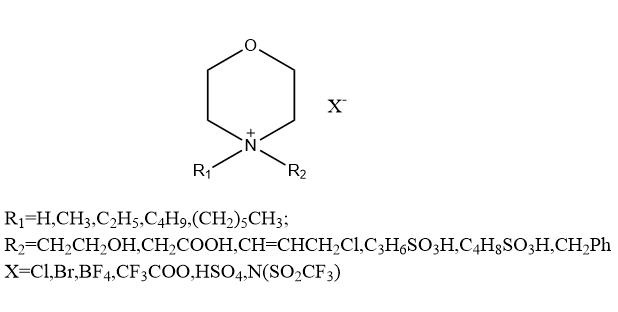