Alfa Chemistry can design many types of functional ionic liquids, as illustrated below. 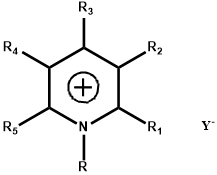