Ionic Liquids For SO2 Adsorption

Ionic Liquids For SO2 Adsorption

Sulfur dioxide (SO2), mainly emitted from the burning of fossil fuels, brings out severe air pollution such as acid rain. Thus SO2-emitting industries worldwide are under pressure to reduce their sulfur emissions. The technologies for SO2 adsorption have attracted increasing interests, among which flue gas desulfurization is the most efficient way. The traditional flue gas desulfurization technologies include dry scrubbing, wet scrubbing using calcium-based absorbents and absorption by aqueous amines. However, these technologies have some problems such as high cost, large amounts of non-renewable by products, huge water consumption, and secondary pollution, so their application in industry is limited. Compared to the traditional flue gas desulfurization technologies, ionic liquids present distinct advantages, such as recyclability, environmental friendliness, structural tunability, and good solubility. Therefore, in recent years, ionic liquids have been proposed to capture and separate SO2 from flue gas or mixed gas [1]. 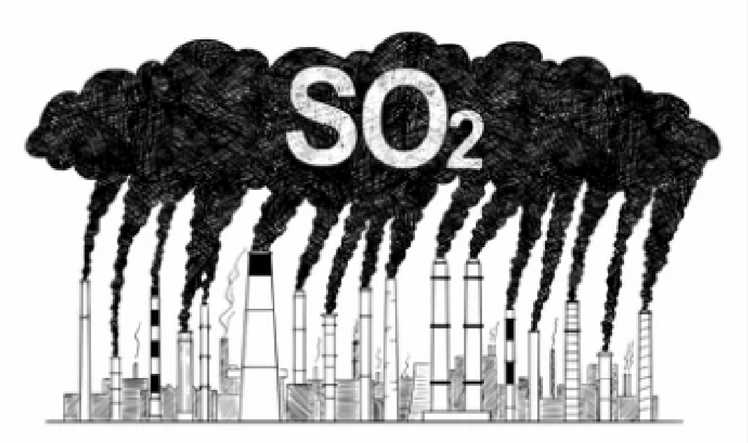 The ionic liquids used to adsorb SO2 mainly include hydroxyl ammonium, imidazolium based, guanidinium based and quaternary ammonium based ionic liquids.

Anderson and co-workers [3] studied the solubility of SO2 in the ionic liquids 1-n-hexyl-3-methylimidazolium bis(trifluoromethylsulfonyl)imide ([HMIM][Tf2N]) and 1-n-hexyl-3-methylpyridinium bis(trifluoromethylsulfonyl)imide ([HMPY][Tf2N]). The results revealed that the solubility of SO2 in [HMIM][Tf2N] was extremely high and that the absorption capacity can be as high as 1.6 mol SO2/mol ionic liquids at 25 °C and 3.44 atm. Furthermore, in their work, the Henry's law constants were also calculated. There was over an order of magnitude decrease in the Henry's law constants for SO2 compared to that of CO2. This result suggested that these ionic liquids present high selective towards SO2.

Huang and co-workers [4] synthesized new 1,1,3,3-tetramethylguanidinium-based ionic liquids and investigated their capacity to absorb SO2. The results showed that up to 2 moles of SO2 could be absorbed per mole of ionic liquid at room temperature and almost completely desorbed by heating or lowering of the pressure. In addition, no change in absorbing ability of ionic liquids was observed after several cycles. The absorption of SO2 in the ionic liquids is an exothermic process and standard enthalpy of solution was found to be in the range -21 to -37 kJ mol−1, suggesting a moderate association between gas and liquid.

Alfa Chemistry has a profound research foundation in terms of gas adsorption, and at our company you can find the appropriate ionic liquid for SO2 adsorption. Alfa Chemistry will serve you with the most abundant experience and affordable prices. If you have any problems, we will provide technical support for you. Please don't hesitate to contact us.